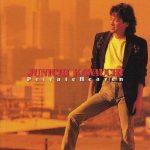 Junichi Kawauchi (河内淳一), better known in the years 70,80 and mid- 1990s , by his stage name “JUN-BOHN”. He was born on April 23, 1956 in Asakusa Taitō (Tokyo) , Japan. He is a musician, singer, songwriter and music producer Japanese.
Junichi collaborated with several Japanese bands and musicians between 1973 and 1986. However, his rise to fame came with Kuwata Band, a musical project, which joined other Japanese musicians. Because Kuwata Band, had a period of reduced activity in 1988 began a solo career being active until 1994. From then until today, again collaborating with various musicians, producer and composer.

8 Born To Be Happy