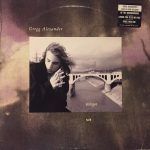 Michigan Rain is the debut album from Gregg Alexander, released in 1989 by A&M Records.

The album was originally supposed to be titled Save Me from Myself, but the title was changed at the last minute, because, as Alexander explained, “[…] the cover was me standing on a bridge with a broken mirror on my wrist and it was before the suicide chic thing.”

“In The Neighborhood” was released as a single, backed with “Don’t Cry, Mrs. Davis”.

“Michigan Rain” was later rerecorded for his 1992 album Intoxifornication. The album also featured an extended mix of Save Me From Myself, and identically reprised tracks “Loving You Sets Me Free”, “Cruel With Me” and “The World We Love So Much”.

The album was not very successful on release, being a minor hit in Italy. Despite Alexander’s later success with New Radicals, Michigan Rain was taken out of print when he was dropped from A&M, and has long been rare and out of print. It is also the only one of his albums to have been released on vinyl, though CD and cassette versions were also produced.

3 Loving You Sets Me Free

10 The World We Love So Much