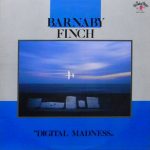 Digital Madness is an album by Barnaby Finch, released in 1986.

Barnaby Finch, a keyboardist, was, for many years, a touring member of Lee Ritenour’s band. He toured with Lee on and off from 1982 to 2008. Prior stints include Ronnie Laws, Alphonse Mouzon, Boz Scaggs, Lionel Richie, and David Foster. His piano was featured on the Lionel Richie/Diana Ross hit “Endless Love”. From 1982 to 1989 Barnaby toured with George Benson, and from 1987 to 1989 he was conductor and musical director. He has recorded with Lee Ritenour, George Benson, Pat Kelley, Lee Oscar, Kazu Matsui, Marlena Shaw, Ronnie Laws, Pressure, Lionel Richie, Earl Klugh, Anthony Marinelli, Tom Scott, Peter Sprague, Hubert Laws, Patti Austin, and Kenny Rogers, among others. He was a member of the Tom Scott Band from 1989 until 1992, performing in the house bands for the “Pat Sajak Show” and the “Carol Burnett Show” and recording the album “Them Changes” with Tom.(source)