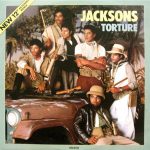 “Torture” is the second single released off the album Victory by the band The Jacksons. Written by Jackie Jackson and fellow Motown veteran Kathy Wakefield, the song is about someone ending a relationship and the torture that a person can receive while trying to end it. Jackie was originally going to sing the song with his brother, Michael, but Jackie’s role instead went to Jermaine Jackson, whose availability for the album was in question until the last minute. The rest of the Jacksons sang the chorus along with Michael and Jermaine.

The song received mixed reactions from critics. The video was probably best known for Michael not being available, and the use of a wax dummy in his place throughout the video. Paula Abdul replaced Perri Lister as the video’s choreographer, in which various scenes of torture are displayed with the Jacksons being on the receiving end of most of it. The shoot was an expensive and arduous affair that neither Michael nor Jermaine took part in, and it ultimately bankrupted the production company. The song peaked at #17 on the Billboard Hot 100 chart, making it the second best selling single on the album, behind “State of Shock”. It also peaked at #26 on the UK charts. This was their last single to reach the US Top 40.

Victory is the seventeenth studio album by The Jacksons. It was released on July 2, 1984 by Epic Records. The album was the first and only album to include all six Jackson brothers together as an official group; also, it was the last album entirely recorded with lead singer Michael Jackson. The album sold over […]