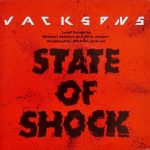 “State of Shock” is a 1984 hit single by the Jacksons featuring frontman Michael Jackson and Mick Jagger. It was written by Jackson and Randy Hansen, a guitarist. “State of Shock” charted at number 3 on the US Billboard Hot 100 and number 14 on the UK Singles Chart. The track was originally to be sung with Freddie Mercury as a duet with Jackson, and was later slated for the Thriller album; however, due to differing time schedules, Jackson ended up recording it with his brothers and Jagger. A clip of the song (an instrumental part) was used on the Immortal album in 2011.

Victory is the seventeenth studio album by The Jacksons. It was released on July 2, 1984 by Epic Records. The album was the first and only album to include all six Jackson brothers together as an official group; also, it was the last album entirely recorded with lead singer Michael Jackson. The album sold over […]