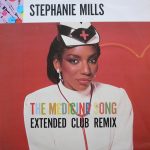 The Medicine Song is a 1984 dance single by Stephanie Mills. It gave Mills her first number one Dance Chart hit; her previous entry on the chart had been “Pilot Error”, which had made it to number three.

“The Medicine Song” stayed at the top spot on the dance chart for one week. The single was her fourth entry to make the Top 10 on the Soul singles chart, peaking at number eight. It also charted on the Billboard Hot 100, and was a Top 30 hit in the UK.

I’ve Got the Cure is the eighth studio album by the American singer Stephanie Mills. The album was released in 1984 and was Mills’ last release on Casablanca Records. It contains the track “The Medicine Song”, which reached number one on the Billboard Dance Chart. In 2013, the UK’s Cherry Red Records reissued I’ve Got […]