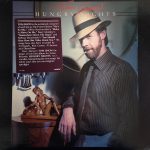 Hungry Nights is the third solo album by Tom Snow. It was released in 1982 on Arista.

Tom Snow was a member of the band Country, which released a sole album on Clean Records, a subsidiary of Atlantic Records in 1971. Tom Snow sang co-lead and played piano. The band included Michael Fondiler, who shared lead vocals and played rhythm guitar, Bob DeSimone on drums, Steve Fondiler on bass and Ian Espinoza on lead guitar and dobro. Their little-known but assured self-titled debut featured Mark and Matt Andes of Spirit and Jo Jo Gunne and Lowell George of Little Feat. Vexed by management troubles – Michael O’Bryant was replaced by Peter Asher – the album sank without a trace. Re-released on the Slipstream label in 2013, the album garnered favourable reviews.

2 Straight For The Heart

3 Love Hangs By A Thread

5 Somewhere Down The Road

8 I Almost Let You Go

9 I Think I Know Too Much

10 Time Of Our Lives