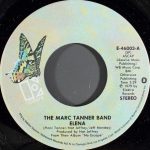 The song was written by Marc Tanner, Nat Jeffrey, and Jeff Monday. Nat Jeffrey also produced the single. It was released on the Elektra label, in January 1979. Two of the features in the song described by Billboard were the wailing sax solo and the sassy vocals. The single was taken from the group’s No Escape album, released on Elektra.

No Escape was an album by the Marc Tanner Band and it included their hit single “Elena”. It was released on the Electra label in 1979. The album made its appearance in early 1979, released on Elektra. It was produced by Nat Jeffrey and Glen Spreen. The ten songs on the album were written by Marc Tanner. Some […]