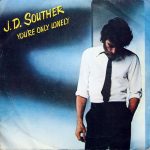 “You’re Only Lonely” is a 1979 single by J. D. Souther from his album of the same name. The single peaked at number seven on the Billboard Hot 100, Souther’s only top ten pop hit, and spent five weeks at number one on the Adult Contemporary chart.

Souther hired Danny Kortchmar to play guitar, David Sanborn on saxophone, Phil Everly to help out with the harmony, Jackson Browne and three members of the Eagles.

The song was covered in 2004 by Taiwanese girl group S.H.E in their album Magical Journey. It was covered by singer-songwriter Schuyler Fisk on her album The Good Stuff.

It is also featured in the 2005 Korean film, Daddy-Long-Legs and the 2013 Korean drama, Give Love Away.

You’re Only Lonely is the third album by American singer-songwriter J. D. Souther, released in 1979. The title song charted as a single on Billboard, reaching number 1 on the Adult Contemporary chart. “White Rhythm & Blues” was covered by Linda Ronstadt on her album Living in the USA. Tracks 1  You’re Only Lonely (John […]