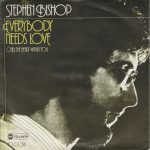 “Everybody Needs Love” is a song by American singer/songwriter Stephen Bishop. The song was the first of two singles from his second album, Bish, the other being “Looking for the Right One.”

The song was a much bigger Adult Contemporary hit, peaking at number five in the U.S. and number two in Canada.

Bish is the second album by singer/songwriter Stephen Bishop. It includes one single, “Everybody Needs Love”, which peaked at No. 32 on the Billboard Hot 100 singles chart. The album itself rose to No. 35 on the Billboard pop albums chart. Notable contributors to the album include Art Garfunkel, Chaka Khan and Michael McDonald. At […]