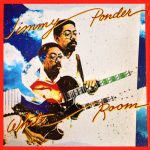 White Room is the third album by Jimmy Ponder. It was released in 1977 on Impulse.

Ponder started playing guitar at age 14. He was influenced most by Wes Montgomery and Kenny Burrell. He began playing with Charles Earland at 17, and in the following years with Lou Donaldson, Houston Person, Donald Byrd, Stanley Turrentine, and Jimmy McGriff. He moved to Philadelphia and later New York City in the 1970s, and recorded extensively as a leader for a number of jazz labels. Since the late 1980s, he frequently returned to his hometown to perform with his trio of two other Pittsburgh musicians, Roger Humphries and Gene Ludwig. Ponder’s highest charting release was the 2007 CD “Somebody’s Child”, topping at #3 on the JazzWeek “airplays” chart in June of that year.

1 If You Need Someone To Love

2 Going Back To Country Living