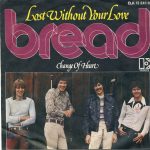 “Lost Without Your Love” is a song written and composed by David Gates, and originally recorded by the pop-rock group Bread, of which Gates was the leader and primary music producer. It is the title track of Bread’s 1976 album, and became their final Top 10 hit.

The single lasted 16 weeks on the U.S. Billboard Hot 100, longer than any of their other songs except their greatest hit, “Make It With You.” It became their comeback hit after an absence from the chart of three and a half years, during which time Gates began his solo career.

Lost Without Your Love is the sixth and final studio album by Bread, released in 1977. The title track of this LP became the group’s sixth and final Top 10 hit, reaching number nine on the US Billboard Hot 100 in February 1977. “Hooked on You,” the follow-up single, subsequently reached number 60. Tracks 1  […]