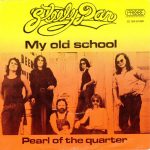 “My Old School” is a single drawn from Steely Dan‘s 1973 album Countdown to Ecstasy. It reached number 63 on the Billboard charts.

The song’s lyrics tell the story of a drug bust at Bard College (named “Annandale” in the lyrics after its location) while both Donald Fagen and Walter Becker were students there, and how a female acquaintance had inadvertently betrayed them to “Daddy Gee” (G. Gordon Liddy, then the local prosecutor). The upshot is that the singer vows he is “never going back” to the college until “California tumbles into the sea.”

Countdown to Ecstasy is the second studio album by the American rock band Steely Dan, released in July 1973 by ABC Records. It was recorded at Caribou Ranch in Nederland, Colorado and at The Village Recorder in West Los Angeles, California. After the departure of vocalist David Palmer, the group recorded the album with Donald […]