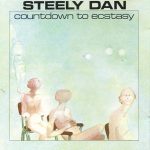 Countdown to Ecstasy is the second studio album by the American rock band Steely Dan, released in July 1973 by ABC Records. It was recorded at Caribou Ranch in Nederland, Colorado and at The Village Recorder in West Los Angeles, California. After the departure of vocalist David Palmer, the group recorded the album with Donald Fagen singing lead on all the songs.

Although it was a critical success, the album failed to generate a hit single, and consequently charted at only number 35 on the Billboard 200. It was eventually certified gold by the Recording Industry Association of America (RIAA), having shipped 500,000 copies in the United States. Well-received upon its release, Countdown to Ecstasy received perfect scores from music critics in retrospective reviews.