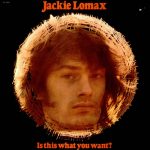 Is This What You Want? is the debut album by English rock and soul singer Jackie Lomax, released in 1969 on the Beatles’ Apple record label. It is notable for the involvement of three Beatles: It was produced by George Harrison and features contributions from Harrison, Paul McCartney and Ringo Starr. The album includes Lomax’s debut single for Apple, the Harrison-written “Sour Milk Sea”, while the US version added “New Day”, which was produced by Lomax and released as a non-album single in Britain.

The recording sessions for Is This What You Want? began in London in June 1968. The majority of the songs were recorded in Los Angeles in October–November that year, after Harrison had completed work on the Beatles’ White Album. Among the other guest musicians on the album were members of the Wrecking Crew, Eric Clapton, Nicky Hopkins, Klaus Voormann and John Barham. Although the album received favourable reviews, it failed to achieve commercial success. The 2010 reissue includes bonus tracks covering the rest of Lomax’s output while on Apple Records.