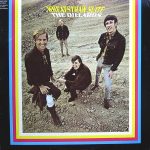 Wheatstraw Suite is the fourth album by American progressive bluegrass band The Dillards, released in 1968 (see 1968 in music). It is the Dillards’ fourth album, and their first to move away from their traditional bluegrass sound by using a full orchestra, electric instrumentation and occasional drums.

The band had been moving toward a more contemporary sound for a few years (they toured with The Byrds, featuring founding banjoist Doug Dillard on a Rickenbacker-built electric version of his instrument and future Buffalo Springfield drummer Dewey Martin), but Wheatstraw Suite was the first time they explored the new sound on a full-length album. The seeds of the album began when the Dillards briefly left Elektra Records, which had released their first three records but was “surprisingly resistant” to the band’s new sound. The group recorded a few folk rock singles for Capitol Records, including different versions of a few of Wheatstraw Suite’s songs. Capitol, however, soon grew unsympathetic toward the Dillards’ style, and they re-signed with Elektra, which was now willing to try the new, more commercial sound.

However, Doug Dillard was unhappy with the new direction and abruptly left the group. Ironically, he would soon be performing a similar type of country rock with former Byrd Gene Clark as Dillard & Clark. The Dillards recruited multi-instrumentalist Herb Pedersen to replace Doug on banjo. The loss of Doug proved to be advantageous to the group, as Pedersen also contributed guitar and shared lead vocal duties with Rodney Dillard.

The group had already stockpiled plenty of material during their stint with Capitol and brief hiatus from recording. The album features seven original songs and six covers—the covers being drawn mostly from contemporary rock and pop musicians rather than traditionals. The Dillards’ blend between pop and bluegrass on this album paved the way for a generation of country- and folk-rockers, making it potentially their most influential album.