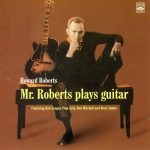 Mr. Roberts Plays Guitar is an album by Howard Roberts, released in 1957.

Roberts was born in Phoenix, Arizona, and began playing guitar at the age of 8. By the time he was 15 he was playing professionally locally.

In 1950, he moved to Los Angeles, California. With the assistance of Jack Marshall, he began working with musicians, arrangers and songwriters including Neal Hefti, Henry Mancini, Bobby Troup, Chico Hamilton, George Van Eps, and Barney Kessel. Around 1956, Bobby Troup signed him to Verve Records as a solo artist. At that time he decided to concentrate on recording, both as a solo artist and a Wrecking Crew session musician, a direction he would continue until the early 1970s.

Roberts played rhythm and lead guitar, bass guitar, and mandolin. He was known for his heavy use of the Gibson L-5 guitar in the studio and for television and movie projects, including lead guitar on the theme from The Twilight Zone as well as acoustic and electric guitar on I Love Lucy, The Munsters, Bonanza, The Brady Bunch, Gilligan’s Island, Green Acres, Get Smart, Batman, Beverly Hillbillies, Andy Griffith, Peter Gunn, Lost in Space, Dragnet, Wild Wild West, Mission: Impossible, The Odd Couple, Dick Van Dyke, I Dream of Jeannie, and the theme for the film Bullitt.

2 I Hear a Rhapsody

5 (Back Home In) Indiana

10 An Orchid for Miss Sterling