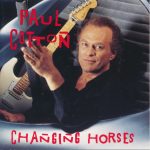 Changing Horses is the first solo album by Paul Cotton, released in 1990.

Paul Cotton (born Norman Paul Cotton February 26, 1943 in Fort Rucker, Alabama) is an American guitarist and singer-songwriter, most notable as a member of the band Poco and as the writer of the international hit song from that band, “Heart of the Night”.

Most of Paul Cotton’s music career has been as songwriter, lead guitarist and lead singer for the band Poco. Cotton joined Poco in 1970, replacing Jim Messina. Cotton’s best known song with Poco is “The Heart of the Night”, which was a major hit from the band’s Legend album, released in 1978. He also penned such Poco classics as ” Barbados”, “Indian Summer”, “Ride The Country”, and “Bad Weather”. Prior to Poco, he co-founded, with Kal David, Illinois Speed Press, which released two albums. Cotton left Poco in early 2010 and now works and tours with his 7 different back-up bands across the Nation. He lives in Key West, Florida where he goes fishing, sailing and sunning when not working on his music. Cotton is actively involved in the Key West community performing at various benefit shows in the area.