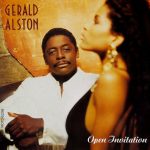 Open Invitation is the second album by Gerald Alston, released in 1990.

Gerald Alston (born November 8, 1951) is an American R&B singer, and the lead singer with The Manhattans. Between 1988 and 1995, he left the group to record five albums (later recording his tribute to Sam Cooke in 2008) and ten solo singles, including “Take Me Where You Want To,” “Slow Motion,” a remake of Atlantic Starr’s “Send For Me,” and “Activated,” most of which was for Motown Records. He joined the Manhattans in 1970, shortly after the death of their former lead singer George Smith and helped the group remain a fixture on the R&B top ten as lead on songs like “Kiss And Say Goodbye,” “There’s No Me Without You”, and “Shining Star”. He is the nephew of Shirley Alston Reeves, former lead singer of The Shirelles and rejoined the group in 1995.

2 Getting Back Into Love

3 Don’t You Know How I Feel

6 Tell Me This Night Won’t End