1989 Yves Choir – By Prescription Only 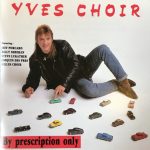 Yves Chouard alias Choir, was a French guitarist and songwriter, born in 1951 and died on 3 November 2008.
He participated in the Cockpit group in 1971 whose line up includes FR David Michel Assa, Dominique Perrier, François Auger, Alain Wisniak, with whom he recorded an eponymous album which includes two of his compositions.
Yves also recorded with artists such as Alain Souchon, Michel Sardou, Michel Fugain, Johnny Hallyday.
He collaborated on the career of Daniel Balavoine from 1979 to 1984 both in the studio and on tour. He also participated in the choirs of the last album “save love” of the latter, released in September 1985. Yves played guitar for the song “Mistral winner”, sung by Renaud. He was part of the 1986 tour  as second guitarist during the tour “Wild chetron”. In 1989, he formed a band with his son Sebastian (guitar) and his brother Gilles (renowned drummer) who released a solo album “By prescription only”. Yves Chouard is urged by the singer Gerard Blanchard and participated in that tour.  He composed songs for Little Bob Story Group.