“I’ve Had Enough” is a song by American band Earth, Wind & Fire, which was written by Philip Bailey, Greg Phillinganes and Brenda Russell. The song was included on the band’s eleventh album Raise! (1981). “I’ve Had Enough” was released in 1982 as a single outside the United States. “I’ve Had Enough” peaked at number 29 on the UK Singles Charts. It was later sampled by German house producer and DJ Tonka in 1998 in his song “Security”. 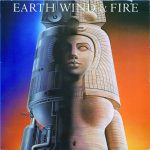