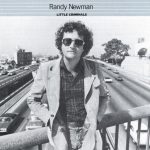 Little Criminals is a 1977 album by Randy Newman. Like most of Newman’s work, the album eschews traditional pop-music themes (“I’ll Be Home” is the only love song on the album) in favor of musical story-telling, often featuring quirky characters and cynical views. The first song on the album – “Short People” – became a hit single in its own right. The album itself peaked at #9 on the US Billboard 200 chart, Newman’s highest-charting album to date.

Some of the instrumental work and backing vocals on the album are performed by members of the Eagles. In particular, Glenn Frey played guitar on two tracks, Joe Walsh played guitar on three tracks, and Don Henley and Timothy B Schmit sang background vocals on one track each. Frey and J. D. Souther, who had earlier been the duo Longbranch Pennywhistle, sang background vocals on three tracks.

Newman wrote, conducted and played keyboards on all tracks. Synthesizers were programmed by Michael Boddicker.

In September 1977 the British music magazine NME published the following interview with Newman talking sardonically about his then new release: “There’s one song about a child murderer,” Newman deadpans. “That’s fairly optimistic. Maybe. There’s one called ‘Jolly Coppers on Parade’ which isn’t an absolutely anti-police song. Maybe it’s even a fascist song. I didn’t notice at the time. There’s also one about me as a cowboy called ‘Rider in the Rain’. I think it’s ridiculous. The Eagles are on there. That’s what’s good about it. There’s also this song ‘Short People’. It’s purely a joke. I like other ones on the album better but the audiences go for that one.”

The song “Baltimore” was covered by Nina Simone, Nils Lofgren, The Tamlins, David Gray, Billy Mackenzie, Lianne La Havas, Jazmine Sullivan and in 2015 Nedric Nedo. “In Germany Before the War” was covered by British band Diesel Park West on their covers album “God Only Knows” in 1992. The song “I’ll Be Home”, meanwhile, had been written by Newman years previously, and was originally recorded in 1970 by Harry Nilsson on his album Nilsson Sings Newman.

2 You Can’t Fool The Fat Man

4 Texas Girl At The Funeral Of Her Father

6 In Germany Before The War

10 Rider In The Rain