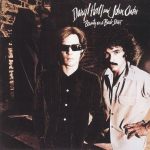 Beauty on a Back Street is the sixth studio album by Hall & Oates, released in 1977. This album takes a more rock-oriented approach, similar to War Babies, but more streamlined and polished.

After this small run of hits, Hall & Oates still encountered difficulty getting radio play. Despite touring constantly and recording albums with efficiency, the duo could not find any pop success for a number of reasons, mainly because of the popularity of the disco genre. By the time they released the rock-oriented albums Beauty on a Back Street in 1977 and Along the Red Ledge in 1978, disco music was trendy and taking most of the spots in popular music. Hall & Oates released X-Static in late 1979, which combined rock with dance music but the album did not fare well although “Wait For Me” did hit the top 20. They did release a few hit singles during this period: the follow-up to “Rich Girl” (“Back Together Again”) hit the Top 40, and “It’s A Laugh” (from “Along The Red Ledge”) hit the top 20 in 1978. In 1977, RCA attempted to push Daryl Hall to the fore with his first solo effort Sacred Songs. However, after being presented with the highly experimental recording (produced by Robert Fripp of King Crimson), RCA became unwilling to release what was, in their view, a non-commercial album. “Sacred Songs” was eventually released in 1980.

2 Why Do Lovers Break Each Other’s Heart?

3 You Must Be Good For Something

9 The Girl Who Used To Be