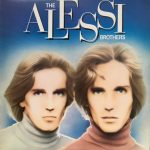 Their song “Oh Lori” reached no. 4 in the UK Singles Chart in 1977, and “Put Away Your Love” reached No. 71 in the U.S. Billboard Hot 100 in 1982. “Oh Lori” became a Top Ten hit in seventeen more countries. The Alessi Brothers recorded five albums on major record labels. They sold over eight million records worldwide, and toured with Andy Gibb on his Shadow Dancing tour. They also charted in Brazil with “Sad Songs” (from the album Alessi, 1977).