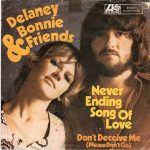 “Never Ending Song of Love” is a song written by Delaney Bramlett, and, according to some sources, by his wife Bonnie Bramlett. It was originally recorded with his band, Delaney & Bonnie & Friends, in 1971 on the album Motel Shot. Released as a single by Atco Records the same year, “Never Ending Song of Love” became Delaney & Bonnie’s greatest hit on the pop charts, reaching a peak of #13 on the Billboard Hot 100 and number eight Easy Listening. It reached #16 in Australia.