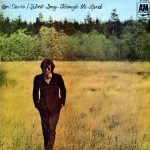 Silent Song through the Land is an album by Ron Davies, released in 1970

The son of country singer Tex Dickerson, Ron took the name Davies after he and his siblings were adopted by their stepfather, Darby Davies. He began his professional songwriting career at the age of 17, when he wrote an entire album of songs for the Tacoma, Washington-based Wailers. He released two albums of his own on A&M Records, Silent Song Through the Land and U. F. O, which he co-produced with Grammy Award-winning engineer Tommy Vicari.

5 Silent Song Through The Land