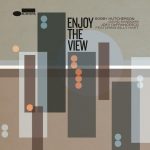 Enjoy the View is an album by jazz vibraphone and marimba player Bobby Hutcherson, featuring David Sanborn and Joey DeFrancesco. The record was released on June 24, 2014 via the Blue Note label and was Hutcherson’s final studio album released before his death on August 15, 2016.