2002 Michael Lington – Everything Must Change 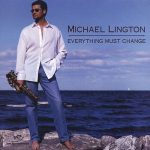 Everything Must Change is the third album by Michael Lington, released in 2002

Lington has released 10 solo albums and has 23 singles that have charted on the Billboard and Radio & Records (R&R) contemporary jazz radio charts.

Lington has performed at the Royal Wedding of Denmark’s future king, Crown Prince Frederik and Crown Princess Mary Donaldson at Fredensborg Castle and has also played numerous other times for the Danish royal family. He is the grandson of Danish composer and band leader Otto Lington.

7 Still Thinking of You