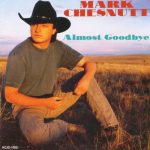 Almost Goodbye is the fourth studio album released by American country music artist Mark Chesnutt. His third album for MCA Records, it was also the third consecutive album to receive RIAA platinum certification in the United States. Four singles were released from this album, of which three — “It Sure Is Monday”, “Almost Goodbye”, and “I Just Wanted You to Know” — reached Number One on the Billboard Hot Country Songs charts. “Woman (Sensuous Woman)”, a cover of the Don Gibson hit from 1972, served as the fourth single, and peaked at #21.