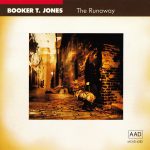 Runaway is the fifth album by Booker T Jones, released in 1989.

Booker T Jones (born November 12, 1944) is an American multi-instrumentalist, songwriter, record producer and arranger, best known as the frontman of the band Booker T. & the M.G.’s. He has also worked in the studios with many well-known artists of the 20th and 21st centuries, earning him a Grammy Award for lifetime achievement.