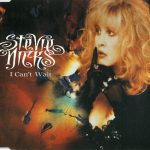 “I Can’t Wait” is a song by American singer Stevie Nicks from her third solo studio album Rock a Little (1985). Written by Nicks, Rick Nowels and Eric Pressly, the song was released as the album’s lead single in Australia, the United Kingdom and Ireland, and as the second single in the United States and Germany.

Rock a Little is the third studio album by American singer-songwriter and Fleetwood Mac vocalist Stevie Nicks. Released in late 1985 while Fleetwood Mac were still on a lengthy hiatus following their album Mirage in 1982, Rock A Little hit the top 20 in its second week and ultimately peaked at #12 on the U.S. […]