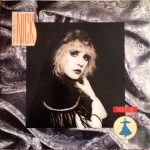 “Talk To Me” is a song recorded by American singer Stevie Nicks for her third solo studio album Rock a Little (1985). Written by Chas Sandford, the song was released as the lead single from Rock a Little on October 1985, through Modern Records. The single became a big hit for Nicks, peaking at number four on the Billboard Hot 100 chart for two weeks and also peaking at number-one on the Billboard Top Mainstream Rock Songs chart for two weeks in 1985.

The song was written by Chas Sandford, who co-wrote John Waite’s 1984 hit “Missing You”. Sandford also plays most of the instruments on “Talk To Me”. The song was brought to the attention of Nicks by its producer Jimmy Iovine, “who was always on the hunt for a hit song.” Stevie says she didn’t like the song at first because she had trouble with the vocals, but Iovine persisted and she eventually recorded it. Jim Keltner was in the studio next door doing some drum overdubs during the recording process. After Nicks explained her dilemma, Keltner gave her some words of encouragement and offered to stay with her and be her audience. Nicks sang the song twice during the session and then it was finished.

Rock a Little is the third studio album by American singer-songwriter and Fleetwood Mac vocalist Stevie Nicks. Released in late 1985 while Fleetwood Mac were still on a lengthy hiatus following their album Mirage in 1982, Rock A Little hit the top 20 in its second week and ultimately peaked at #12 on the U.S. […]