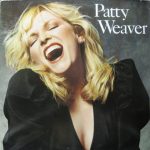 The selftitled album is the fourth album by Patty Weaver, released in 1982 on Warner Bros Records.

Patty Weaver (born September 23, 1949) and 1967 Alumni of Fairborn High School is an American actress who played the role of Gina Roma on The Young and the Restless on a contract basis from 1982 until August 2005, when she was dropped to recurring status, and she last appeared in early 2009.