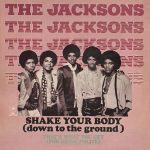 The most successful of the Jacksons’ recordings for Epic, “Shake Your Body” (originally demoed as “Shake a Body”) was produced by the Jackson brothers, written by Randy and Michael, and featured Michael on lead vocals. The chorus “let’s dance/let’s shout (shout)/shake your body down to the ground” was inspired by an ad-lib from Marvin Gaye’s “Got to Give It Up”: “Let’s dance/let’s shout (shout)/gettin’ funky’s what it’s all about” and the rhythmic pattern from Teddy Pendergrass’s “Get Up, Get Down, Get Funky, Get Loose” (from his album Life Is a Song Worth Singing, released a couple of months previously).

Destiny is the thirteenth studio album released by American band The Jacksons recorded at Dawnbreaker Studios – San Fernando, California. It was released in 1978 on Epic Records. The album would eventually sell over four million copies worldwide, two million in America during its initial run and another two million worldwide. The album marked the […]