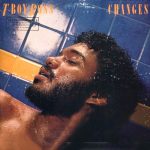 Arthur Ross (February 28, 1949 – June, 1996) was an American singer and songwriter most notable for his collaborations with Leon Ware. He was the younger brother of entertainer Diana Ross.