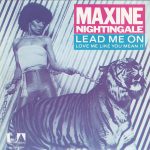 “Lead Me On” is a popular song which was a hit single for Maxine Nightingale in 1978. The song was written by Allee Willis and David Lasley: (Allee Willis quote:) “David and I were just writing all the time, and there was a song out called ‘Emotion’ by Samantha Sang that we both really loved. So we said: ‘Let’s write something in that spirit.’ I was going through a huge breakup at the time, so for me [‘Lead Me On’] was just a completely autobiographical song.”

“Lead Me On” was introduced on Love Lines which was Nightingale’s third album for United Artists Records. Love Lines was issued in 1978 in the UK and Europe and “Lead Me On” was the second of two non-charting singles from the album, the first being “(Bringing Out) The Girl in Me”).

Although United Artists did not release “Lead Me On” or its parent album in the US, Al Teller who had been president of United Artists when Nightingale had recorded her breakout hit “Right Back Where We Started From” made the US release of “Lead Me On” the debut single on Windsong Records shortly after assuming the latter company’s presidency in January 1979 and the track began to accrue interest that spring particularly in the easy listening market with the #1 position on the Billboard Adult Contemporary chart attained that July.

In all, “Lead Me On” spent seven weeks atop the AC chart (for the weeks of July 7, 14, and 21; August 4, 11, and 18; and September 1). On the Billboard Hot 100, “Lead Me On” peaked at number five, while reaching number 37 on the R&B chart. Despite the fact that it was an AC song, it enjoyed better success in Canada, where it reached number two on the pop singles chart and spent 4 non-consecutive weeks at number one on the RPM Dance Music Chart.