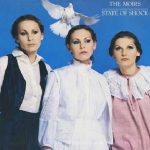 State Of Shock is an album by The Moirs (also known by The Moir Sisters). It was released in 1978.

The Moir Sisters were a Scottish-Australian pop and folk vocal trio which formed in 1970 by the eponymous sisters, Jean, Margot and Lesley. Their debut single, “Good Morning (How Are You?)” (1974), which featured their distinctive high-pitched harmonies, peaked at No. 8 on the Kent Music Report Singles Chart. The group released two albums, Lost: Somewhere Beyond Harmony (1974) and State of Shock (as The Moirs, 1978), In 1989 Margot Moir (married name: Margot Cesario) released a solo single, “Scarlet Skies” and followed with her album, Strong and Mighty, in 1996. Margot died in 2015.