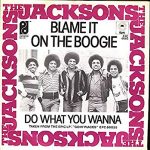 “Blame It on the Boogie” is a song originally released in 1978 by English singer-songwriter Mick Jackson, then The Jacksons, and later covered by numerous artists. The song was performed on Musikladen (January, 1979), Aplauso (February, 1979), Sonja Goed Nieuw’s Show (2 February 1979) and ABBA Special: Disco in the Snow Part 1.

The song was co-authored by Mick Jackson (credited as Michael George Jackson-Clarke) as well as Mick’s brother David Jackson and Elmar Krohn.

Although Mick Jackson recorded the song in 1977, “Blame It on the Boogie” was written in hopes of being sold to Stevie Wonder.

The Mick Jackson track was showcased in 1978 at Midem where according to Mick Jackson: “The Jacksons’ manager (Peter Kerstin) heard the track being played…and took a tape recording of it…back to the States The Jacksons quickly recorded a version so it would be out before mine.”In fact, the Mick Jackson recording was released by Atlantic Records in the US in August 1978.

According to Michael Jackson of the Jacksons, Bobby Colomby, who was producing the Jacksons’ Destiny album, brought the group “Blame It on the Boogie”. “It was an uptempo, finger-poppin’-time type song that was a good vehicle for the band approach we wanted to cultivate. I had fun slurring the chorus: [the lyric] ‘Blame It on the Boogie’ could be sung in one breath without putting my lips together.”

Destiny is the thirteenth studio album released by American band The Jacksons recorded at Dawnbreaker Studios – San Fernando, California. It was released in 1978 on Epic Records. The album would eventually sell over four million copies worldwide, two million in America during its initial run and another two million worldwide. The album marked the […]