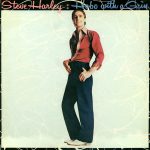 In July 1977, Harley disbanded Cockney Rebel and began working on his debut solo album, which was largely completed by early 1978. In February of that year, Harley flew to Los Angeles to finish working on the album, which had been given the working title Couples. Of the album’s nine tracks, six were recorded at Abbey Road Studios in London, and the other three were recorded in Los Angeles at Sunset Sound or Record Plant. Using a range of session musicians and ex-Cockney Rebel members, the album featured contributions from a range of personnel, including Jim Cregan, George Ford, Duncan Mackay, Stuart Elliott, Gloria Jones and Marc Bolan, as well as American musicians such as Tom Moncrieff, Bob Glaub, Bill Payne, Roy Kenner, Bobby Kimball and Michael McDonald. A mixture of older songs, written when Cockney Rebel were still active, were recorded, alongside some newer material. The album was mixed at Sunset Sound and mastered at Capitol Mastering.

Soon after the album was completed, Harley decided to leave Britain and live in Los Angeles. He had been first attracted to the city when recording and mixing the Love’s a Prima Donna album there in 1976. Purchasing a house in Beverly Hills, he stayed there for nearly a year to gain new experience and inspirations. When Hobo with a Grin emerged in July 1978, it was revealed the album cost £70,000 and took 18 months to make, and yet proved to be Harley’s biggest flop. The album failed to make any chart appearance, as did its two singles. The first, “Roll the Dice”, was released in July, while the second, a remixed version of “Someone’s Coming”, was released in February 1979.

3 Living In A Rhapsody

4 I Wish It Would Rain

5 Riding The Waves (For Virginia Woolf)

8 (I Don\’t Believe) God Is An Anarchist