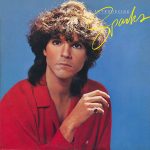 Introducing Sparks is the seventh album by Sparks released in 1977. The release was their second and final album for Columbia Records. At the time of its release it was a commercial failure and received very negative reviews claiming that the band had adopted a new ‘American sound’ despite the fact that the Mael brothers are indeed Americans.

Introducing Sparks was no more a success in terms of chart performance than their previous album Big Beat. It did not chart in the UK or US. “A Big Surprise” backed with “Forever Young” was released a single but failed to gain any significant sales or radio play. The Mael brothers next would team-up successfully with Giorgio Moroder in 1978 to record a very different album from Introducing Sparks.

Sparks is an American rock band formed in Los Angeles in 1971 by brothers Ron (keyboards) and Russell Mael (vocals), renamed from Halfnelson, formed in 1968. Known for their quirky approach to songwriting, Sparks’ music is often accompanied by intelligent, sophisticated, and acerbic lyrics, and an idiosyncratic, theatrical stage presence, typified in the contrast between Russell’s wide-eyed hyperactive frontman antics and Ron’s sedentary scowling. They are also noted for Russell Mael’s falsetto voice and Ron Mael’s keyboard style.