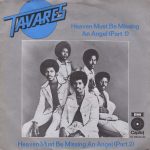 “Heaven Must Be Missing an Angel” is a disco song written by Freddie Perren and Keni St. Lewis. It was recorded by the American band Tavares in 1976. It was released as a single from the album Sky High! and was split into two parts: the first part was 3 minutes and 28 seconds in length, while the second part was 3 minutes and 10 seconds. “Heaven Must Be Missing an Angel” was re-released in February 1986.

The song would also afford the group an international chart hit, reaching number 1 in the Netherlands, and charting in Australia (30), Canada (11), the UK (4), and South Africa (16)

Sky High! is the fourth studio album by American soul/R&B group Tavares, released in 1976 on the Capitol label. The album peaked at No. 20 on the R&B albums chart. It also reached No. 24 on the Billboard 200. The album features the singles “Heaven Must Be Missing an Angel”, which peaked at No. 3 […]