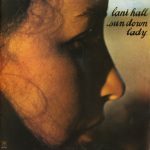 Sun Down Lady is the debut album by Lani Hall, released in 1972.

Lani Hall (born November 6, 1945) is an American singer, lyricist, author, and the wife of Herb Alpert. From 1966 to 1971 she performed as lead vocalist for Sérgio Mendes & Brasil ’66. In 1972 she released her first solo album Sundown Lady, but she may be best known for her rendition of the theme song to the 1983 James Bond film Never Say Never Again. In 1986 she was awarded her first Grammy Award for Es Fácil Amar as “Best Latin Pop Performance.”

3 How Can I Tell You

6 We Could Be Flying