1971 The Undisputed Truth – Face To Face With The Truth 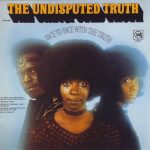 Face to Face With the Truth is the second album by the Motown group The Undisputed Truth, released in 1972.

Like their previous album, it was produced entirely by Norman Whitfield and most of the songs were also recorded by The Temptations, but with different arrangements. Two singles were released from the album, both minor hits on the Billboard charts: “You Make Your Own Heaven and Hell Right Here on Earth”, and “What It Is?”.