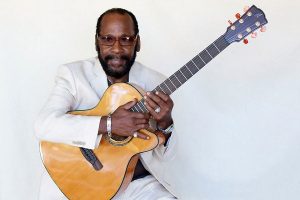 Melvin Ragin (December 8, 1950 – October 24, 2018), better known by the nickname “Wah Wah Watson“, is an American guitarist and session musician famed for his skills with a wah-wah pedal.

In 1977, Watson released his first solo album, Elementary, on Columbia Records. The album was co-produced by Watson and David Rubinson.

In 1994, Watson appeared on the Red Hot Organization’s compilation album, Stolen Moments: Red Hot + Cool. The album, meant to raise awareness and funds in support of the AIDS epidemic in relation to the African American community, was heralded as “Album of the Year” by Time magazine.