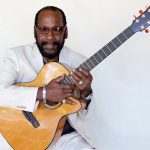 Melvin Ragin (December 8, 1950 – October 24, 2018), better known by the nickname “Wah Wah Watson“, is an American guitarist and session musician famed for his skills with a wah-wah pedal.

1971 The Undisputed Truth – Face To Face With The Truth

1972 The Temptations – All Directions

1975 Harvey Mason – Marching In The Street

1978 Deniece Williams Johnny Mathis – That’s What Friends Are For

1980 Donna Washington ‎– For The Sake Of Love

1993 Spirit Traveler – Playing The Hits From The Motor City