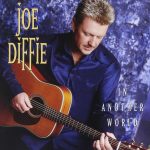 In Another World is the eighth studio album released by American country music artist Joe Diffie. His only album for Monument Records, it features the single “In Another World”, a Top Ten single on the Billboard country singles charts in 2002. “This Pretender” was also released as a single, reaching #48.

Two of this album’s tracks were also recorded by other artists. “The Grandpa That I Know” was originally recorded by Tim Mensy on his 1992 album This Ol’ Heart and later by Patty Loveless on her 2004 album On Your Way Home. “My Give a Damn’s Busted” was covered by Jo Dee Messina on her 2005 album Delicious Surprise. Messina’s rendition of the latter song was released in early 2005, and was a Number One single for her on the country charts.