1997 Phil Upchurch – Whatever Happened To The Blues 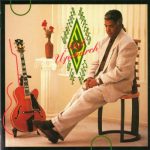 Whatever Happened To The Blues is the 18th album by Phil Upchurch, released in 1997.

Philip Upchurch (born July 19, 1941, Chicago, Illinois) is an American blues, jazz and R&B guitarist and bassist. Upchurch started his career working with the Kool Gents, the Dells, and the Spaniels before going on to work with Curtis Mayfield, Otis Rush, and Jimmy Reed. (His association with Kool Gents member Dee Clark would continue, including playing guitar on Clark’s 1961 solo hit “Raindrops”.) He then returned to Chicago to play and record with Woody Herman, Stan Getz, Groove Holmes, B.B. King, and Dizzy Gillespie.

2 The Tide Keeps Lifting Me

7 Whatever Happened To The Blues

8 I Don’t Want Nobody To Give Me Nothing

10 Nice To Have You Around