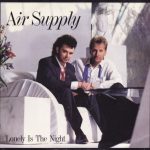 “Lonely Is the Night” is a song by Australian-British band Air Supply, released in 1986, as the lead single from their ninth studio album, Hearts in Motion (1986). The ballad was written by Albert Hammond and Diane Warren, while John Boylan produced it. “Lonely Is the Night” was a minor success in the United States, reaching number 76 on the Billboard Hot 100 and 12 on the Adult Contemporary chart.

Hearts In Motion is the ninth studio album by Australian soft rock band Air Supply released in 1986. The album was a serious step down in the band’s popularity. While their previous self-titled album had charted gold, Hearts In Motion did not attain any certification, peaking at #84 on the US charts. The album didn’t […]