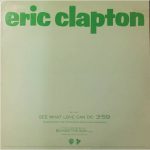 See What Love Can Do is a rock song written by Jerry Lynn Williams and released in 1985 by Eric Clapton on his album Behind the Sun at Warner Music Group.

When Clapton returned to England from The Pros and Cons of Hitch Hiking Tour, Warner Bros. told him they were looking for potential hit singles. He and his manager asked the record company what they thought of as a hit single. Warner Brothers sent Clapton three titles: Forever Man , Something’s Happening and See What Love Can Do. The piece features Phil Collins ‘ synthesizer and keyboard sounds , mixed with Clapton’ s chords and distorted intermediate parts, and guitar solos .

The single release reached # 89 on the Billboard Hot 100 in 1985 and stayed on the US charts for two weeks. In addition, the single took rank 20 of the mainstream rock tracks charts in the same year.

Behind the Sun is the ninth album by English guitarist Eric Clapton, released in 1985. The title of the album comes from a line from Muddy Waters’s “Louisiana Blues”. It is also Clapton’s first collaborative project with Phil Collins. After nearly a decade of Clapton’s guitar playing taking a back seat to his singing/songwriting, this […]