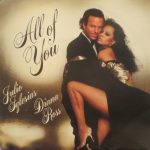 In the middle 1980s, having already achieved a high level of international prominence, Spanish singer Julio Iglesias was seeking to gain a foothold in American music; to this end, he had learned English. On his album 1100 Bel Air Place, he had already recorded a cover version of “The Air That I Breathe” in duet partnership with the Beach Boys and an original selection, “To All The Girls I’ve Loved Before,” in duet partnership with Willie Nelson. Richard Perry, the album’s music producer, suggested the idea of Iglesias having Diana Ross as yet another duet partner, and Iglesias agreed.

To the extent which became public knowledge, Iglesias and Ross had never met each other, least of all performed together, before becoming duet partners on the selection; Iglesias’s and Ross’s meeting when the video was being produced is believed to have been their first. That would soon change as Ross reportedly ended up spending the Christmas holiday season at Iglesias’s Miami estate. They there celebrated the success of their global duet that hit #1 in Spain, #3 in Italy, and #8 in Canada for example. In the United States, it reached #12 in Cash Box and #19 in Billboard. Additionally, “All of You” reached #2 on Adult Contemporary radio. Because it was the second single from 1100 Bel Air Place and the first single from Diana’s successful Swept Away album, it helped sell both artists’s albums. It also boasted a hugely popular and sensual music video.

Ross was having some career difficulties at the time she agreed to the duet partnership with Iglesias; she had left Motown Records over a dispute with Berry Gordy which would not be resolved for years, and was recording for RCA Records (EMI in the UK and the rest of the world) at the time. Though her debut album for the label, Why Do Fools Fall In Love, had been successful three years before, her most recently released album, Ross, was not performing as well.

Iglesias collaborated with one of his “Amigos,” Tony Renis, on the composition of the music; veteran songwriter Cynthia Weil, better known for her partnership with Barry Mann, wrote the lyrics, which were in English–a language Iglesias could barely speak at the time. Richard Perry served as music producer.